A Chasm of Racial Disparity twixt The Gladiators on the field / court … and The Spectators in the stands and luxury suites.

That both Football and Men’s Basketball (and Women’s BB too maybe ??) in the Power 5 Conferences are now dominated by African American / “Black” athlete-faux-students is not “a bad thing”.  But it is “a thing”.

That Black teenagers are generally more talented in Football / Basketball skills – for whatever list of “whys” – than their White / Brown / Asian teenage peers – seems “a given” and has been the case for twenty plus years.   There may be other occupational aptitudes that favor other racial / ethnic groups for whatever reasons.

Today we are dealing with the development of skill superiority in Football and Basketball … dramatically favoring Black youth versus their peers of other racial/ethnic groups.

Unless you have been “Rip Van Winkling” for the past few decades … and the past few weeks in particular … America is suffering from a Pandemic of Socio-Racial Sensitivity Or Lack Of  the level of which this country has never faced. 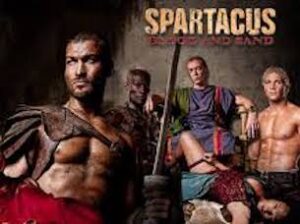 The Socio-Racial InSensitivity in College Athletics is getting a great deal of media attention with new examples being highlighted daily.

The original Gladiator VS Spectators resulted in “Spartacus” leading a gladiator/slave rebellion that created havoc within the Roman Empire… the stage seems ripe for a modern day “Spartacus” to rally Black college athletes.

If not to “revolt” in the manner of Spartacus’ times at least to create Chaos and Havoc that could reshape the “playing fields” of both professional and college Football and Basketball.

It might be trite to anoint Colin Kaepernick as “Spartacus 2020”.   I think Kaepernick is simply an afro-haired puppet being played by more sinister forces but let’s go with it.

Roger Goodell realized The NFL has been forced into Unconditional Surrender.

His choice was either  to surrender and hope for humane treatment by his conquerors … OR – “Go Alamo” and die for a cause.   Since there is no noble cause to die for … Roger hoisted the white flag.   Turning over the keys to The NFL Kingdom to its Black players.

How humane their treatment will be to the vanquished NFL owners remains to be seen.

Watching intently is a 3rd party – NFL fans – who supply the working capital that fuels The NFL coffers for both owners and players alike.  There is a lot of sabre-rattling and harrumphing by unhappy fans.  How much of that Fan Discontent persists into The Fall playing season remains to be seen.

NOTE:  “Polls show” that 99% of Power-5 FB/BkB Head Coaches will spit on their mother’s grave  – AND –  chew off three of their own toes to keep their black players happy. … What would YOU do to keep a multi-million $$$ salary?

The Univ of Iowa was the first program to be highlighted.  Florida State, Clemson and Oklahoma State have been next.  With many others to follow.

If you think “that’s it” then you likely think there is only ONE cockroach in your kitchen … or ONE termite in your foundation.

Your Hated Rival is – of course – a rancid pit of creepy crawlies of the most repulsive sort.  It’s high time that criminal enterprise be TAKEN DOWN… By Golly.

Iowa – supposedly – has/had a Strength coach who routinely disparaged their Black players over a period of years… including prohibiting them from “wearing Flip Flops” in the weight room!   Flip Flops are a “racial thing”?  Who Knew?

The state of Iowa has a 3% AfAm population.  The Iowa Football roster is 60% AfAm … Huuumm.  One can assume the Hawkeye Fat Cat Club / Stadium attendance reflects the state’s diversity rather than the roster’s diversity.

For 25+ years no one saw a “ticking time bomb” with such a glaring disparity??

An OMG rumor started by an overly-caffeinated Gamecock fan that “Dabo” was a KKK code word for “I hate Mud People” was proven untrue.

“Dabo” countered by burning all his “Football Matters” gear … and leading a BLM parade thru Clemson’s (deserted) campus.

Dabo is considering erecting a 40′ billboard atop his house flashing – I ♥ Black Kids … Especially 5-star ones!

… just kidding about that last one.

Oklahoma State’s Mike Gundy also wore an Insensitive t-shirt on a fishing trip that featured the logo of a TV network – OANN – that has not been supportive of the BLM Rioters / Looters. … Gundy did a “Drew Brees”… first dismissing the accusation as silly.   Then Mike realized if his black players all transferred he would NEVER defeat the Hated Sooners.

Mike Gundy burned HIS offensive OANN t-shirt and is – reportedly – in the process of painting I Think BLM Rioters /Looters Are A Cool Bunch of Swell Guys in giant letters on Boone Pickens Field.

I forget what Florida State did … probably involving another insensitive Asst coach and/or another t-shirt.  Whatever it was… their new coach Mike “Something” is saying a 100 Hail Rosa Parks and considering tattooing a picture of “Calypso Louie” Farrakhan on his forehead.

FWIW… No one has ever accused Football Assistant Coaches of being Renaissance Men.  99% of’em claim Patton as their favorite movie … and The Art of War as favorite book among those that even “have a favorite book”.

Their two basic skills are “blowing smoke up recruits’ butts” and “yelling a lot”.  That some lack socio-racial sensitivity will not surprise anyone who has ever talked with one for five minutes.

As Dabo and Mike and Every Coach in Power 5 World realizes … without their Black players they will lose a whole lot of games… thereby really upsetting their 98%  All-White Boosters and 94% White Fan Base.

Over in Chapel Hill … a disgruntled former Off Coordinator in Butch’s Gang – John Shoop – wrote a scathing LTTE to the financially and morally bankrupt N&O blasting UNC AD Bubba Cunningham and pretty much everyone ever associated with UNC-CH for their long history of systemic racism.

Many of UNC-Hater John Shoop’s points were valid as recent Great Unpleasantries have revealed.  Alas, very few people other than THE Bob Kennel actually read N&O LTTEs so the impact of Shoop’s vicious screed will be statistically zero.

On a high % of Power 5 campuses (including UNCCH) … a Black male is likely either a Football or Basketball player … OR an employee of the maintenance department.  OUCH!

The Gladiators Are Revolting.  These modern day gladiators chances of achieving whatever their goals are are A LOT better than Spartacus’ ever were.

The NCAA and Power 5 athletic programs are in the same untenable position as The NFL.  If College Sports do not capitulate to the demands of their black athlete-faux students they decimate their teams.  Their players will transfer to where their demands ARE met.

Many of their demands are legitimate circa 2020.  Many are not.  Those discussions will be “interesting”.

What’s New over on SAIDWHAT? …

No America… I Expect You To DIE!

….Is George Soros (WHO?) an Arch Villain of Bondian proportions ??

BobLee compares the mysterious Gazillionaire Anarchist to other Super Villains …

O Say Can You See … The Art Of This War?