TV Sports w/out cable or dish The Triangle’s and WRAL’s own Joe Ovies (a BL Twitter follower) has researched and reported on how to access live sports without traditional cable or satellite.   The concept of “cutting the cord” appeals to everyone UNTIL you realize If I Do:  “how will I watch all the games I enjoy?”

This article does involve a certain level of techno-awareness; but does provide the “how do I” answers to your quandary.

Cable and satellite television providers hook consumers on convenience. One box with one remote – all you have to do is turn on the television and everything is there. You can flip through hundreds of channels, fire up the DVR or browse their catalog of on-demand offerings. These viewing habits become so entrenched, so second nature, that blowing it all up in favor of a more à la carte model can be intimidating. Even more so for sports fans, who feel wedded to cable and satellite out of fear of missing the action.

In April, I ditched my cable subscription out of curiosity. Could the average sports fan still have a satisfactory television experience with an over-the-air antenna and apps? After providing the basic requirements in a beginner’s guide for sports without cable or satellite, I used the summer as a sort of preseason to prepare for stacked months of sports ahead.

Turns out football without a traditional bundle is easier than you might have thought.

Big brand college football will always be available the old fashion way – with an antenna. ABC, CBS and FOX will carry marquee late afternoon and primetime games featuring programs from the ACC, SEC, B1G, Big 12 and PAC 12. Notre Dame will be on NBC seven times this season, including three contests against ACC opponents. Meanwhile, matchups that are lower in the broadcast pecking order can be found on local television affiliates of the ACC Network and SEC Network.

As for the ESPN family of networks, Sling TV is still the only “ethical” way of accessing the Worldwide Leader. 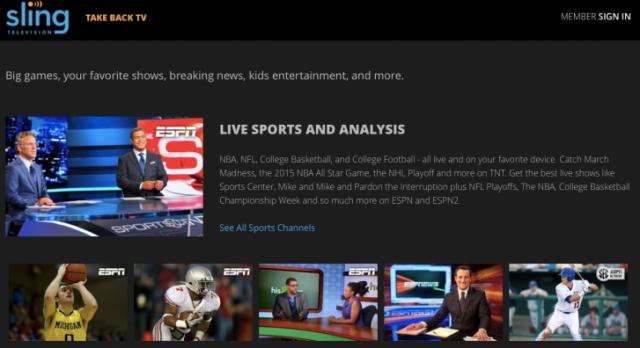 Sling is a service operated by Dish that provides “over-the-top Internet” live television. Viewers get a small package of channels, including ESPN and ESPN2, for $20 a month. Throwing down an additional $5 a month for the “Sports Extra” tier gives fans access to ESPNU, SEC Network, ESPNEWS and ESPN Goal Line (a college clone of NFL Red Zone).

While Sling TV is easy to use, its biggest downsides include lack of DVR and only one device can watch TV per login.

If you’re a college football completist, a fan who obsessively watches as many games as possible from the Power Five to the fringes of the Sun Belt, not having cable of satellite will have drawbacks. Access to Fox Sports 1, CBS Sports Network, Big Ten Network, PAC 12 Network and regional sports networks such as Fox Sports South through their respective streaming apps are only possible with a television provider login.

So if you want to watch Duke take on Tulane and Army on the CBS Sports Network in September, use the money you’re saving without cable to bring a case of beer to a friend’s place or support a local sports bar.

In comparison to college football, watching the NFL without a traditional cable or satellite bundle is plain sailing and most fans will be satisfied with their over-the-air offerings.

Consider the 1 p.m. kickoff typically features your local team and a regionally appropriate contest on CBS and FOX, while the late afternoon brings attention to a bigger matchup carried to most of the country. NBC features the national game of the week in primetime.

As another example, look at the the Carolina Panthers schedule. They’ll play on FOX, CBS or NBC for 15 of their 16 games this upcoming season. The cable-only exception arrives on Nov. 2 when the Panthers meet the Indianapolis Colts on ESPN. If you’re already subscribed to Sling TV for college football, you’re good to go for all the Monday Night Football games.

Also consider half of the Thursday Night Football schedule can be watched over-the-air on CBS thanks to a partnership agreement with the NFL Network.

But let’s say you’re not satisfied with the basic offerings. Perhaps you’re a displaced fan who roots for an out of market team. Maybe you just want to bombard yourself with as much NFL football until your eyes dry out from all the screen time. Don’t worry, you have options.

NFL Sunday Ticket is now available à la carte through DirecTV, allowing fans to live stream games on a variety of platforms such as Roku, Chromecast, XBox and Playstation. However, the pricing structure is a bit ridiculous, and there are restrictions.

DirecTV will only make Sunday Ticket available to customers that can’t get DirecTV service due to location reasons. Let’s say you live in an apartment that doesn’t allow satellite installation or live in a house with enough obstructions, that’s when DirecTV will make their streaming option available. To check your availability, punch your address into nflsundayticket.tv.

Verizon Wireless customers can stream games through the NFL Mobile app as part of their service. The basic plan allows you to watch NFL Network games and regional coverage from CBS, FOX and NBC. For a couple extra dollars a month, Verizon Wireless also offers Red Zone through your phone. Don’t worry, there are ways to share the NFL Mobile screen to your television depending on the brand of phone.

Cord-cutting is not a new phenomenon, but 2015 marks the first time major broadcast companies have begun publicly addressing the issue. In July, I wrote about ESPN facing the realities of a slowly eroding cable base and how Disney put themselves in a tricky situation by overpaying for sports rights fees. Since then, there’s been a few more tidbits to keep an eye on if you’re interested in the subject.

Ultimately, how we watch television is changing. Whether it will be better than the current model remains to be seen, but I’m of the belief consumers will be happier with a choice to pay for what they want to watch rather than subsidizing channels they never knew existed.

Here is another article on the same subject….

Kid Rock Declares “I am a Republican”.