See what happens when a Mamma Hippo fails to “humanize” her baby.   Unnamed Baby Hippo mauled and eaten by “members of the pod”.  This unfortunate infant was two days old but had not been “humanized” with a cute fuzzy name” like Cecil.    This Horrible Natural Act a/k/a “hippos doing what hippos do” took place in the same Natural Habitat where Cecil The Lion was killed several weeks ago. Official records show that “Herbie” ….. “Hugo” …. “Henry” …. and “Hussein” were all available had Mamma Hippo requested them for her baby.

HippoLovingLoonies.org are considering filing charges against Mamma Hippo for failing to humanize her baby thereby making this consequence a Global Incident.   There is a concern that “hippos are simply not as cute as Flipper and Cecil” so it may be more difficult to generate a public outcry…..

“Mother Nature” did not respond to our request for a comment.

By TOM WYKE FOR MAILONLINE

A two day old hippo calf has been mauled to death after its mother introduced it to the pod and the other hippos turned upon the infant.

The baby was being introduced to the rest of the pod when it was suddenly set upon and torn to pieces in the water in the Hwange National Park, situated in Zimbabwe.

The remains of the calf were later seized upon by an opportunist crocodile, who quickly ate the animal’s tattered corpse following the devastating water attack. 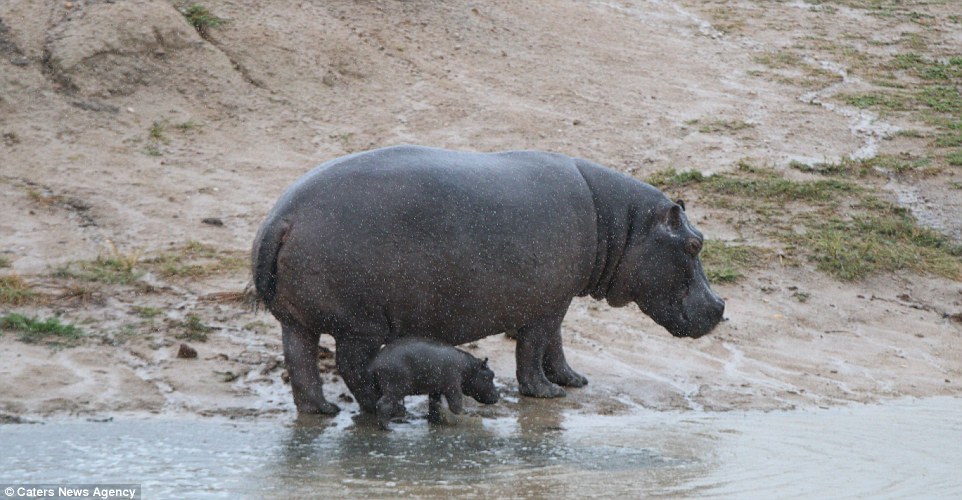 Final moments: The calf and its mother wait nervously on the side of the bank before introducing the calf to the rest of the pod

Disaster: The final moments before the calf is seized upon by the hippos and is killed in a brutal act of infanticide 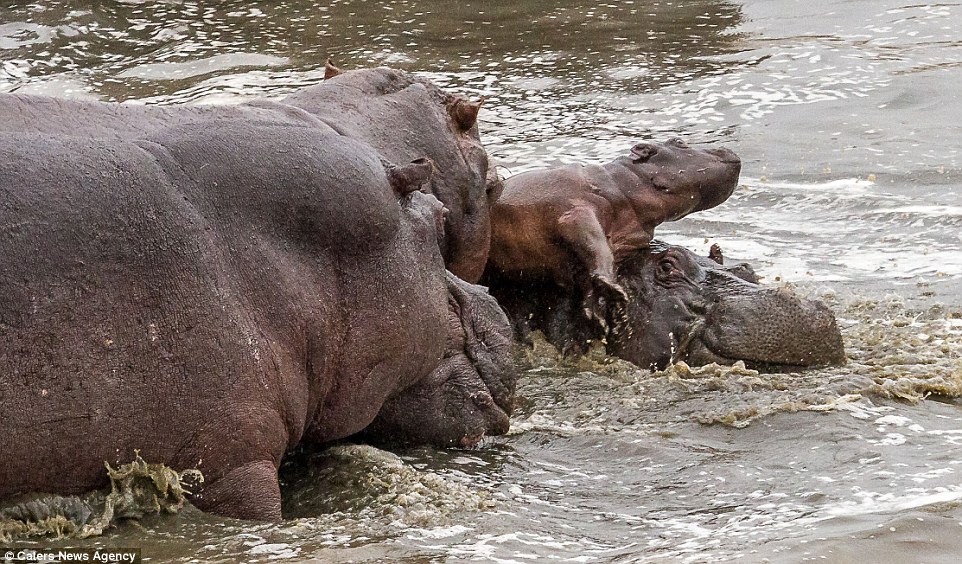 No escape: The hippo calf has no chance as several of the fully grown hippos pounce on the baby in the water

The graphic photographs of the brutal scene were captured

….. by James Wilson, who spotted the attack in Hwange National Park, Zimbabwe, where Cecil the Lion was controversially killed. Wilson said the attack was so shocking, ‘even the most seasoned guides felt a little traumatised by the sight.’

It is believed that hippos sometimes commit infanticide when they are overpopulated or struggling with a form of sickness.

The reasons for hippos to commit infanticide remain relatively unknown due to the difficulty of studying the aggressive creatures. Hippos tend to attack humans who stray too near their water pool, fearful that their calfs may be at risk from humans.

Photographer James Wilson said: ‘We’re not sure exactly what possessed the hippo to do this but the point is that this is the reality that is life and death in the African bush. Although we were all a little startled by what we had just seen, we knew we had been fortunate enough to witness an incredible moment in nature.’

‘We mostly see hippos lazing in the water with the cute tips of their ears and eyes poking out they’re seemingly lazy creatures.There had been an exception shortage of rain during the wet season, but the heavens opened for two consecutive days.

The brutal beasts lunged for the helpless calf, tossing him into the air without showing any remorse, leaving the water red with baby hippo blood

‘It became apparent that a mother hippo, separated from the pod, was suckling her new-born calf. The mother usually isolates herself from the pod to give birth and slowly introduces the calf when she feels ready we were fortunate enough to arrive at that very moment, a special experience,’ he said.

‘While the mother was protective of the calf, she made no obvious attempt to keep the younger hippo from coming too close as it wobbled precariously during its first few steps on land. For no apparent reason the mother began backtracking something was about to go down.

He described the attack as ‘a scene of complete chaos.’

Recalling the shocking scenes, he said: ‘Three adults launched themselves towards her and sent her fleeing for safety. The calf was left stranded on the other side while they continued to target the mother.’

‘Suspecting the calf might be in trouble we watched as a few adult hippo cornered the mother on one side of the waterhole, while about seven hippo began moving in on the calf,’ he said.

A pod of hippos normally contains between 10 to 15 large hippos and have been known to kick out other hippos from the herd in an act of male dominance.

They are well known for their aggressive behaviour and have been known to kill humans if they sense danger. Hippos spend most of their time in water in order to prevent their skin from cracking in the heat.

A hippopotamus, meaning ‘river horse’, can weigh as much as 3,200 kg and are not considered as an endangered species.

Tossed in the air like a small ragdoll, the adults show no mercy as they kill the small hippo calf in the murky waters 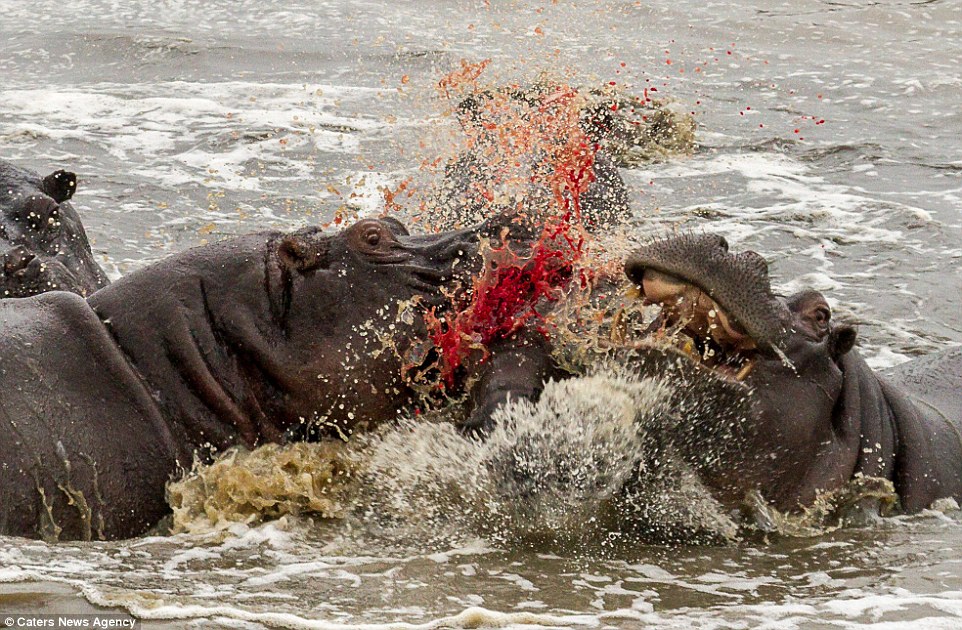 Carnage: The water turned red as the gruesome scene begun to unfold. It is unclear what caused the adults to turn on the calf

FIghting: A pod of hippos normally contains between 10 to 15 large hippos and have been known to kick out other hippos from the herd in an act of male dominance

Supper: A hungry crocodile quickly seized upon the remains of the young hippo before devouring it in the water

There was a piece in the New York Times by grad student from Zimbabwe who pointed out that the natives were far from outraged when a lion is killed. It was the tourists who saw Cecil as Simba from The Lion King. The natives sorta hold grudges since every now and then a lion kills and eats one of them. That said, it is apples and oranges comparing a pod of hippos thinning their numbers for what ever reason hippos kill their own to a human killing an animal for sport. I am not saying it is immoral. The bad… Read more »

All the facts about “the trophy-hunting dentist” are not public yet. I’ve never cared for sport hunting but understand why many do. Killing a deer / elk from half-mile away with a sniper rifle seems un-sporty to me.

Maybe given the way natives look at lion hunters, Dr. Palmer could relocate his practice to Zimbabwe. He could be The Great Whitening Hunter over there.

Marlin Perkins could have explained it. There’s a saying used in Africa to rationalize the wacky, the unexplainable, the normal, the quirky stuff, for just about every situation imaginable. T.I.A. This is Africa.