Coyotes on the prowl near PNC Arena in West Raleigh ……  Schneck Forest is just west of PNC Arena off Wade Avenue. 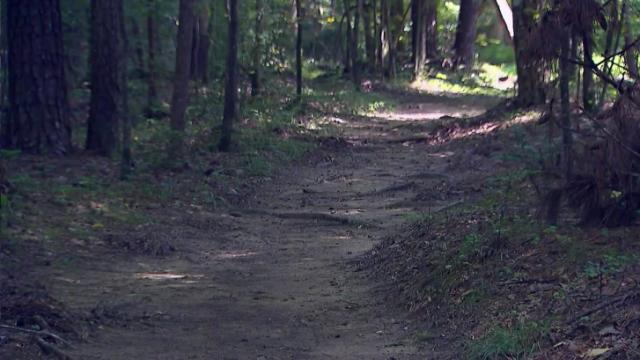 Find News Near Me

RALEIGH, N.C. — Three coyotes tracked a man walking his dog in Schenck Forest in west Raleigh last week and later tracked police escorting the man from the area after he called 911 for help, police said.

Steven Keating, 24, was walking on Richland Creek Trail near the intersection of Edwards Mill Road and Wade Avenue at about 6:30 p.m. on July 1, and he told a 911 dispatcher that he spotted the coyotes when his boxer’s behavior caused him to survey their surroundings. As he reversed his course and began moving away, the coyotes followed and flanked him, and he climbed up a 3-foot-tall elevated manhole with the dog for safety, he said.

“They started walking toward me, so I just yelled and got big,” Keating told the dispatcher. “One started running at me, so I sprinted with my dog and came up here. Once I got up, it turned and ran into the woods and went further down and was just staring at me for a while.”

Officers from the Raleigh Police Department, the North Carolina State University Police Department and Raleigh Animal Control were dispatched and had to follow the trails from both the north and the south to locate Keating and his dog. As the officers began to escort them out of the wooded area, the coyotes followed and flanked the party for an estimated 300 yards until the woods gave way to a clearing, police said.

Dogs are prohibited in Schenck Forest, but the rule is rarely enforced.

Lt. Sam Craft with the state Wildlife Resources Commission said encounters like Keating’s are extremely rare, but it’s possible the coyotes have a den nearby.

“They have their pups with them this time of the year, and so, they’re trying to feed their pups and pretty much take care of them at this point,” Craft said.

There’s never been an unprovoked coyote attack on a human in North Carolina, even though the crafty canids are in each of the state’s 100 counties – urban areas as well as rural. Coyotes generally want nothing to do with people, Craft said, but he advised anyone approached by a coyote not to turn your back on the animal and never, ever run from it.

“They’re predators, and that’s what their prey do is run from them,” he said. “Stand your ground, make loud noises, anything that you can do to try to turn the animal away.”