Majoring in “Studies” ….. Our Favorite Campus Firebrand – The “Notorious” (to some people) Mike Adams at UNC-W nails Another One. 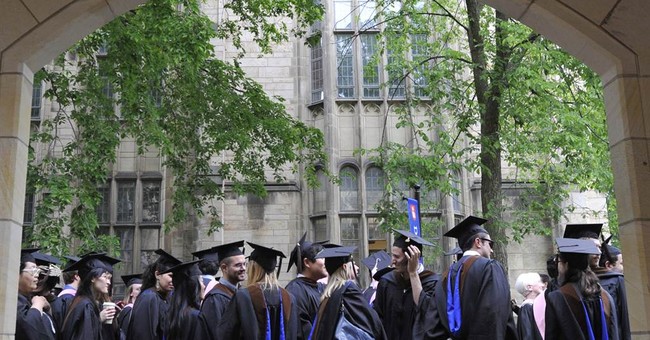 The world of Facebook was ablaze shortly after the U.S Supreme Court decided that the votes of opponents of pretend marriage were not equal to the votes of those who support pretend marriage. One of my former students who double majored in criminology and film studies expressed her disappointment that the Supreme Court had deprived the people of the right to vote on the issue. She used no profanity or any harsh language. She just expressed her opinion and used Supreme Court dictum to back up her views.

Within minutes, a mob of film studies majors decided to gang rape her Facebook page. It began with one film studies major saying she was an angry bigot because opposing pretend marriages means you think gay people are not equal to other people. His intellectual hernia was so advanced that did not see the obvious weakness in his argument. He was claiming that those who disagree with him about equality are his intellectual and moral inferiors and don’t deserve equal dignity and respect.

The other film studies majors who joined the “argument” were even less intellectually gifted. One stated that my former student just needed to keep her opinions to herself or share them with her therapist. Why? Simple. If you don’t support pretend marriage like her, then you suffer from mental illness, which requires therapy. In other words, gay people aren’t mentally ill, but their political adversaries are mentally ill; all of them need psychological help.

Maybe you think this is just one isolated thread from one isolated “studies” major. Think again; the film studies department is not the worst faux major with the worst professors and students. Enter Women’s studies.

Last year, when a criminology professor was told that a new policy meant that he had to retroactively divulge the names of any students who had ever reported a rape to him he was perplexed. He previously had a student report to him that she had been gang raped. He had helped her out by reporting the crime to a local prosecutor.

Years later, and after the case was closed, the university suddenly suggested that he also needed to divulge the name of the gang rape victim to the university Dean. Knowing this would certainly traumatize her he refused. In fact, he openly defied the university in an opinion column.

When a lesbian woman’s studies professor found out about the criminology professor’s decision to respect the victim’s privacy, she publicly defamed him on her Twitter account by specifically accusing him of violating Title IX. Then, she decided to get her women’s studies students involved. That’s when she decided to repeat the defamatory statements in the classroom.

Predictably, her women’s studies students took to Facebook and falsely accused the professor of “concealing a rape.” In other words, reporting a rape to a prosecutor rather than a college dean was “concealment.” It takes hard work to be that obtuse. In fact, it probably takes multiple courses in women’s studies to make a college woman that stupid, but it gets even worse.

Another women’s studies student then decided to take to the Internet calling the professor a “pro-rape activist.” Let that sink in for a minute. A person with formal “education” in women’s studies has now concluded that launching a criminal prosecution against several rapists – and doing so through a prosecutor, rather than a dean – is actually a concealed effort to legalize rape.

This is not higher education. This is hysteria. Indeed, women’s studies departments do not produce educated adults. They just produce hysterical women. Maybe you think this is hyperbole based on one isolated incident from another faux studies major. Think again; enter African American studies.

In a real African American studies class, students are taught that America is a racist nation and certain public policies, like affirmative action and slavery reparations, are necessary. In a fake African American studies class students are not actually taught anything. The classes just exist on paper so basketball players can focus on shooting free throws instead of getting an education.

I guess you could also say that the common theme between the fake classes and the real ones is that they both encourage a sense of entitlement by giving people that which they have not earned through the fruits of their own labor. Or maybe you think I am overgeneralizing. Maybe you think this is just one isolated incident from another faux studies major. Think again; enter Communication studies.

Suddenly, for some strange reason a professor wrote to the local newspaper and falsely accused the pro-life group of lying about the incident. In other words, he claimed that they were never victims of any effort to censor their ideas. He did so without taking the time to consult the Facebook page of the women’s studies professor or the police report. Both could have been used to verify the pro-life students’ version of events. Instead, he just publicly accused them of lying.

So who was this professor who butted into a controversy that was already resolved, reignited the conflict, and defamed the students? He was a professor specializing in mediation and conflict resolution. In fact, he has actually written books on conflict resolution. You know, like experts do. (You can’t make this stuff up, can you?). And I know you will never be able to guess the department of this woefully inept communicator. You guessed it: he teaches communication studies.

I rest my case. I trust that most people reading this column possess the intelligence and objectivity necessary to accept my basic thesis that studies majors are higher education’s new version of special education for mentally challenged and intellectually dishonest high school graduates. Those who reject my thesis probably have degrees from one of these departments.

Regardless, the moral of the story is the same. Friends don’t let friends major in anything ending in the word “studies.”